No products in the cart.

When LCBO Food & Drink Carla was a little wet under the ears and had no idea what prestige being featured in a magazine such as this really meant. She was knee deep in the throws of making butter tarts for one of her many summer events when her phone rang. Carla never gives up an opportunity to speak about her many baked goods so when Marc Smith from Marc my Travels asked her about her cookies, Carla had no qualms about speaking to him.

As they were speaking, Marc asked if there were any interesting cookies Carla would like to feature for the fall, that is when she came up with the Pumpkin Spiced Whoopie Pie. She had never tried making it and didn’t really how she would develop it, but she knew it sounded delicious, so it was the cookie she had told him she was going to develop.

Once the Pumpkin Spiced Whoopies were developed, they instantly became a fan favourites and continue to be so today. Carla’s Pumpkin Spice Whoopie Pies are encased with Swiss Meringue buttercream and a dollop of caramel. You can enjoy other whoopie pies flavours as well throughout the year. 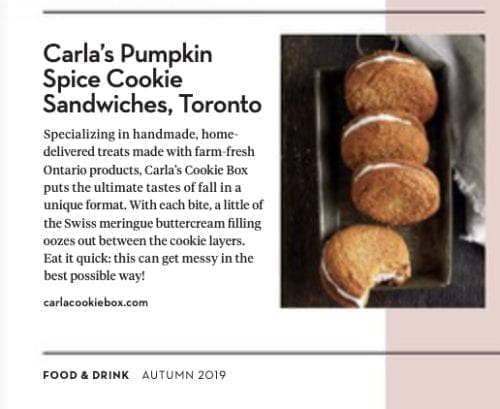